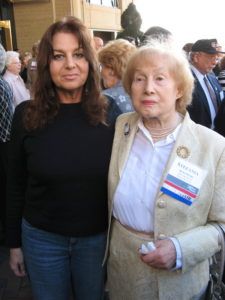 Krystyna with Stefi at the US Holocaust Museum

Stefi’s daughter, Krystyna Diamant, cared for Stefi at her home for nearly 18 months as Stefi’s dementia began to worsen and she was less able to live in an assisted living facility.  Krystyna doted over Stefi to make sure she was exercising her mind and body.  Krystyna would push Stefi to participate in daily chores, go for walks and be engaged in life. That intense caregiving became full-time as Stefi’s dementia worsened.  Stefi ultimately needed more professional care and Krystyna was heavily involved in finding and vetting the right home for her mom.   Stefi moved a few times to different homes and Krystyna was always on top of those places, monitoring mom’s health and sometimes going toe-to-toe with staff to make sure mom was well cared for. Without Krystyna’s relentless attention, Stefi’s condition would have worsened sooner.