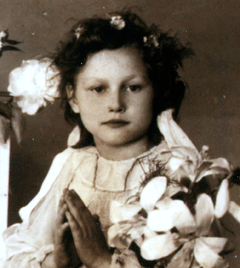 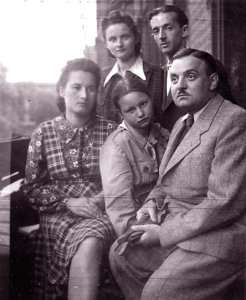 Fusia, Helena, Joe and two of the rescued just after the war.

One of the most important people in Fusia’s life was her little sister Helena.  As a child, Helena was thrust into the situation to hide 13 people, and she was fully committed to helping no matter the cost.

As a child, Helena was less likely to be noticed by the Nazis, so she up doing much of the difficult work of going to the market many times a day to buy food, she would often carry heavy buckets of water from a well to the house where the 13 were hiding.

Since she was small and overlooked by Nazis, this brave young girl would sneak in and out of the Przemsyl ghetto communicating with some of the people who would ultimately be rescued by her and Stefi.  Helena was bringing a note to someone in the ghetto with instructions on how to get to her and Fusia’s place and an SS soldier spotted her trying to talk with someone through the fence.  He chased and grabbed her.  Helena knew that if that SS-man read the note, they would all be killed. While running away, she swallowed the note, the SS-man grabbed her.  Helena kicked him in the shin, he let go and she ran around a corner before he could get off a shot.  This young girl, not yet ten years old had the mental stamina to swallow that note.

After the war, Helena became a doctor, with a strong-will, clear thought and incredible personal fortitude.  After all these years, Helena’s mind remains razor-sharp, she a warm heart heart and a jovial personality.  She has a hearty, contagious laugh and is a very deep, spiritual woman.